The Implications of an Ultra-low Yield World

This quarter’s newsletter addresses two issues; large cash balances in client accounts and the challenges investors face in an ultra-low interest rate world. Before discussing what lies ahead, here’s a quick a review of 2019 performance.

In the first nine months of 2019 (if MCS clients’ investments were treated as one large portfolio including their cash), clients gained 4.11%1 on average, after fees. For comparison purposes, the S&P 500 Total Return Stock Index (S&P 500) gained 20.55%, and the Barclays Aggregate Bond Index gained 8.52%. The range of MCS individual client returns was from a gain of 0.30 % to a gain of 8.93%. These results represent the flip side of a defensive strategy; you don’t make as much as investors who took more risk.

If you’ve looked at your Schwab statement, you have noticed that cash balances are now a very large percentage of your portfolio. This is my investment decision, and it is based on the lack of attractive risk-adjusted investments available in the market. As I write this, the yield curve is inverted, meaning short term rates are higher, or nearly as high as, long-term rates (see Figure 1). The orange line shows interest rates on September 30, the green line on October 18. 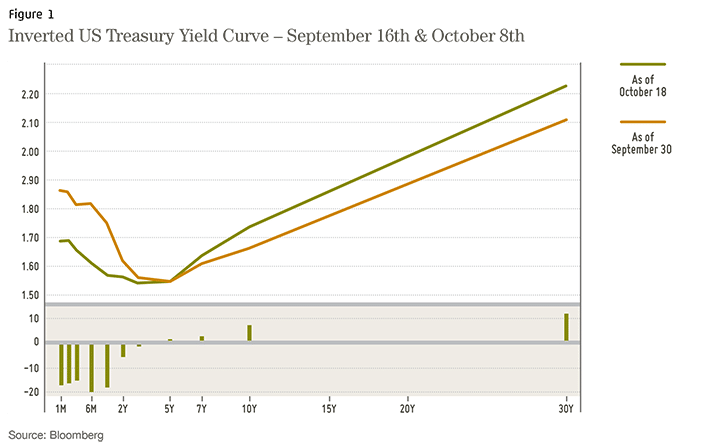 As interest rates have shifted, bonds maturing in less than a year (which includes money market funds) now offer higher yields than many longer-term securities, and for a fraction of the risk. This is what active management looks like; finding clients the best risk-adjusted return given the available investments. After US Treasury Bills (T-Bills) I purchased for clients mature in October, many clients will find their money market balances even larger. It has been difficult to find attractive short-term bonds, and by “attractive” I mean bonds offering enough extra yield to compensate for the additional risk, liquidity, and tax advantages of T-Bills.

Events this year, however, demonstrate that we also need to prepare for a very long period of low bond yields. It may seem confusing that last year I was concerned about higher rates, and this year I see persistent lower rates as a problem, but we are in a place where either outcome will hurt investors. Higher interest rates from unexpected inflation, or a prolonged period of ultra-low interest rates, are both very bad news for savers. Previous newsletters have discussed the risk of higher rates (which played out last year), so this newsletter discusses the risks of a long period of very low interest rates.

What Got You Here, Won’t Get You There

US Interest rates have been falling for 37 years (Figure 2), and they are likely to continue to fall until rates on 10-year US treasury bonds are negative. I’m going to offer a big picture view of how we got here and the implications for the future. As you can see in Figure 2, interest rates peaked in the early 1980’s and have been declining ever since. Today rates are lower than at any time in the past 57 years. With the benefit of hindsight, the boomer generation and their parents have been two big demographic cohorts of lucky ducks. Falling interest rates over the past 37 years have created a tremendous tailwind (present value effect) boosting the value of real estate, stocks and bonds, which in turn boosted investors’ net worth.

I am not ignoring factors like economic growth, demographic trends, stock buybacks, etc., but I want to impress upon you the present value effect of lower interest rates is a major contributor to the higher asset prices we see today. How Do Ultra-low Rates Affect You Long Term?

The falling interest rate tailwind has all but petered out, and interest rates will likely end up in negative territory in the next recession (if not before). Negative yields mean that investors pay the government when they buy government backed debt, rather than the government paying them. Investors are getting back less money than what they invested, and that doesn’t even take inflation into consideration. While that may sound crazy, negative interest rates on 10-year government bonds are as follows: Japan (-.14%), Germany (-.41%), Switzerland (-.45%), France (-.37%), Sweden (-.55%) and Netherlands (-.43%). To take Switzerland as an example, that would mean investing $10,000 in government bonds today and getting $9,559 back after ten years, or $9,183.45 adjusted for a 0.4% annual inflation rate.

If a Japan-like ultra-low interest rate environment for US investors persists for many years, the strategy that I have employed successfully on your behalf throughout my career is dead.

The MCS strategy has been to allocate (70% plus or minus) to longer term (5 to 15 year) investment grade bonds to create a reliable stream of cashflow. The rest of the portfolio is allocated between cash and stocks. The heavy emphasis on earning interest and repayment of principal at maturity allowed clients to ride through past financial crisis with ease and a great sense of security. It provided steady continuous compounding of your money and predictable cashflow. This strategy, to produce reliable cashflows to meet retirement income needs, is similar to how insurance companies and many pension funds invest (or did at one time).

Persistent rock bottom interest rates on safe investments are an unmitigated disaster for savers, worldwide. Watching the Fed’s and market’s reaction to events that have unfolded over the past year or so, I must conclude that clients should be prepared for a scenario of near zero interest rates on long term government bonds for years to come. This scenario would profoundly impact most investors. My gut probability that a prolonged period of low interest rates comes to pass: 60-70%.

If you have a pension, you are better off than most, but you should not count on receiving all the benefits promised. A
recent Bloomberg article illustrates the case (emphasis added):

“All across corporate America, underfunded pensions have become the norm. Even now, a decade after the financial crisis, the largest plans face a shortfall of $269 billion, right about where it was 10 years ago. Years of low interest rates have largely offset gains in the stock market. Companies haven’t helped matters by lavishing money on shareholder rewards and clinging to assumptions about returns that proved to be too rosy.2”


“Using higher projected returns lowers the money (an expense) the plan sponsor must contribute. It lets them report higher earnings” Warren Buffet warned in Berkshire Hathaway’s 2007 annual report. And if they’re wrong, “the chickens won’t come home to roost until long after they retire.”


Public pensions play the same game; underfunding contributions and over-estimating future returns. ‘Kicking the can down the road’ on plan funding issues allows them to stay on budget and minimize criticism by both plan beneficiaries (You promised!) and taxpayers (My taxes are too high now!).

The deck is stacked against you compared to those with traditional pension plans. Those saving for (or in) retirement using 401k / profit-sharing plans are much worse off. There is no backstop like added employer contributions in a pension plan to make up for funding shortfalls in a 401k/ Profit sharing or similar plan. Defined contribution plans have significant limits on annual contributions and even in the rare situations where the plan participant has the money to make a larger contribution, they can’t legally do so.

Large pension plans have another advantage over individuals saving for retirement. Pension plan retirement benefits are typically spread over many, many decades. This provides time diversification; pension payments will be distributed over many investment cycles allowing the plan a better shot at earning the long-term return of the asset class they are invested in, thus reducing the impact of a period of poor investment returns. An individual saving in a 401k has no time diversification advantage. A 401k participant is going to retire at a certain point in the investment cycle and they are stuck with what follows.

What Follows: Lessons from Japan?

A recent Bloomberg article discusses the failure of ultra-low rates to boost Japan’s economy and importantly lands on a central theme of this newsletter: US Investors saving for, or in, retirement are in trouble and don’t yet realize it.

Quotes from the article sum up the problem:
“For now, Japan’s problem is unique, but if low rates are prolonged, which I think they are likely to be, this will be a serious challenge for the U.S. and other nations,” Kanno3 says. “The bottom line is that the global economy is facing the question of how we are going to live” without interest income on safe assets such as government bonds.
“The paltry returns represent a very real threat to Japan’s population of pensioners…” BOJ Governor Haruhiko Kuroda has warned. Figure 3 starts at the last time Japanese 10-year bonds yielded about 2%4 Japan has the longest experience with ultra-low and negative interest rates. On 12/31/1998 the interest rate on the Japanese government 10-year bond was 2.22 %, and it has not been higher since. Stock returns since 12/31/1998, including reinvested dividends, have averaged a measly 3.72%. While I would agree that the US is not Japan, and that Japan is the only example of an economy that has had a long period of ultra-low rates, the experience of Japanese stock investors during the past 20 years should give US investors pause.

What about stocks in an ultra-low rate environment?

US based advisers love to talk up the benefits of long-term stock investing using US historical data as support. What concerns me is that US historical data may have little relevance, or be entirely misleading, when the future is comprised of outcomes with little historical precedent.

Historically (1926-2018), the average annual return on US stocks is roughly 10%. In the current environment, I’d estimate a more realistic long-term return assumption for US stocks is 4% to 6%. A total return on US stocks of 5% may seem too low, and yet it would very look good compared to the 3.72% return on Japanese stocks since 1998, the last time rates were above 2% on 10-year Japanese government bonds. Assuming a 2% bond yield and a 50/50 allocation to Japanese bonds and stocks 20 years ago would produce a total return of 2.86% before management fees.

If Japan’s twenty-year stock returns in an ultra- low interest rate environment are any indication, the return on buy and hold stock index investing will be a gut-wrenching disappointment for those with return expectations near historical averages.

Figure 4, below, shows the returns on Japanese stocks, including and excluding dividends, after interest rates on the Japanese 10-year bond dropped below 2%. For 15 years of the 20-year period, the market went sideways. I use Japan as the longest real-world example of what an ultra-low yield world can look like for investors, and the pressures this can put on pension funding (whether for individuals or pension funds). German 10 year bonds entered the sub 2% yield world in late 2011. It’s reasonable to assume the US will follow. As I was writing the newsletter, I found many articles that address the implications of a low return world on pension funding. A sampling of titles speaks volumes: